Adam graduated from the R(D)SVS and initially worked in two large small animal hospital practices in Gloucestershire. On returning back to Scotland, three years were then spent in an out-of-hours emergency clinic before joining the R(D)SVS, first as Visiting Clinical Fellow and then as Resident in Canine Medicine.

A year was then spent back in first opinion practice in Edinburgh before he then completed a PhD on production of canine liver cells from stem cell sources at the Roslin Institute and R(D)SVS. It is hoped this research will help development of new drugs for the dog as well as reduce the need for animal testing.

Adam is currently head of small animal internal medicine at the R(D)SVS. 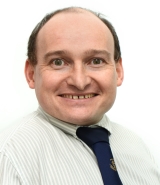