Jitka has a great love for animals and became a professional dog groomer in 1998, subsequently establishing the Vita Canis Dog Grooming Salon in Slovakia. She has won many awards including British Groomer of the Year 2006, Euro Groom Best in Show 2006, 2007, 2009, Groomania Best In Show 2010 and Master Groom Best In Show 2012.

Jitka has been a member of Groom Team England for 6 years.

To grow her knowledge of all things holistic Jitka has a Diploma in Canine Massage, Reiki Level 2 qualification and is qualified in Deep Cellular Therapy with tuning forks. She has also completed a Diploma in Aromatherapy at the Penny Price Academy of Aromatherapy, UK.

Jitka owns a brand of natural products for dogs & their owners called Vita Canis. All the products are 100% natural and hand made. 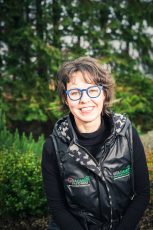